The Empress of Tomorrow was close to achieving her past glory in 2019. She started the evaluation period with a strong SmackDown main event victory, winning a #1 Contenders battle royal, eliminating The IIconics, Carmella and Sonya Deville. Her Mixed Match Challenge team defeated Uso and Naomi to advance, but lost to Fabulous Truth in the final round. She faced Charlotte Flair in the main event of SmackDown, winning by DQ. At TLC PPV she competed in the first-ever women’s TLC match in the main event of the PPV. She won after the assistance from Ronda Rousey to win her first SmackDown Women’s title.

The following Tuesday, she had her first title defense against Naomi, defeating her in a competitive match. She beat Billie Kay in a quick match to continue with momentum. At Royal Rumble, she defeated Becky Lynch, at the height of her popularity, to retain the SmackDown Women’s title. After the win, Asuka lost to a roll-up by Mandy Rose, which granted her a title shot. Asuka ended up defeating her at Fastlane. She went on to defeat her partner, Deville, in a quick match after that. Two weeks later, Asuka was forced to defend her title in an impromptu match against Flair, which she lost, despite giving her all. She was put in the WrestleMania Battle Royal, eliminating Candice LeRae, Nikki Cross and Sonya Deville. She was one of the last 3 women, but was eliminated by Sarah Logan.

After WrestleMania, she was put in a Tag Team with Kairi Sane, named The Kabuki Warriors, and were managed by Paige. They went on to defeat The IIconics and Rose & Deville in Tag Team matches. After a few months of inactivity, they were booked in a Fatal 4-Way Elimination Tag Team Title match. Asuka managed to eliminate Rose and Deville. In the end, Bliss and Cross won with Bliss pinning Sane. They got another opportunity the following week, where Bliss pinned Sane once again.

After a month off TV, The Kabuki Warriors returned with a win over newly-named Fire & Desire and demanded a title shot. They received a title match at Hell in a Cell, defeating Bliss and Cross following Asuka’s mist attack on Cross. This marked Asuka’s and Sane’s first Tag title win. They followed it up with three strong victories against Lynch and Flair, Evans and Natalya, and an NXT title match win over Kai and Nox.

After a Tag Team loss to Natalya and Flair, where Asuka tapped out, Flair received a title shot, and Natalya was replaced by Lynch. After a long match, Asuka rolled up Lynch to retain. The following week, she defeated Natalya in a quick match to regain her momentum. She and Sane were part of the Raw women’s Survivor Series team, competing in the first-ever 5-on-5 Triple Threat Elimination Tag Team match. Asuka eliminated Dana Brooke and got to spit mist on Flair, after which she left the match, resulting in a count-out. In the end, Ripley won for Team NXT.

With a strong PPV main event victory, two title wins and a protected win-loss record, Asuka still remains one of the most feared women on the roster. She had singles and tag team success in 2019 and showed a new side of her, a new mean streak that helped revive her career once again. With 2020 around the corner, Asuka looks to step out of the tag title picture for a moment and try to defeat Lynch once again and become a Grand Slam winner. With her overall win-loss record and big victories over Lynch, she may just do that. What Asuka wants, Asuka gets. 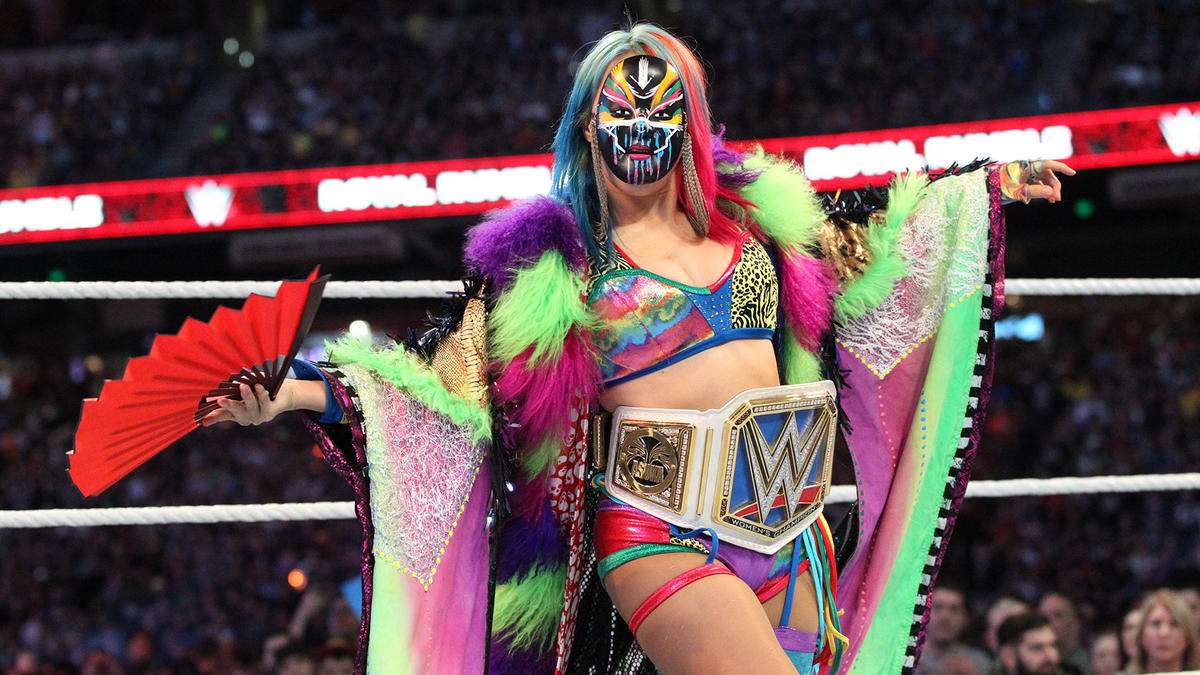 Check with us tomorrow as we begin to reveal the Top 5 on our list!