The current SmackDown Women’s Champion, Bayley, lands at #3 on our list. 2019 was a year of resurrection for her, in more than one way. She competed in the 2018 women’s Gauntlet match in the main event of Raw, starting it off by eliminating Alicia Fox and Dana Brooke. She lasted 20 minutes, before being eliminated by Mickie James. What followed were Tag victories with Sasha Banks over The Riott Squad, Fox and James, and Natalya and Rousey.

She competed in her second Royal Rumble match, entering at #27. She lasted an impressive 15 minutes and got to eliminate Ruby Riott, Rhea Ripley and Alexa Bliss. She was taken out by Charlotte Flair and Nia Jax. The following night she challenged Ronda Rousey in a Raw Women’s title match, lasting 15 minutes. She tapped out, however. Next week, she and Banks defeated the team of Cross and Fox to enter the women’s Elimination Chamber match.

They were defeated in a Triple Threat Tag Team match on Raw, with Nia pinning Bayley, resulting in Banks and Bayley starting the Chamber match first. At the PPV, they made history. Even though they entered the match first, they were the last team standing. The Boss N Hug Connection eliminated Tamina/Jax and Rose/Deville to become the first-ever Women’s Tag Team champions.

They were set to feud with Jax and Tamina, where Bayley defeated Jax in a singles match. At Fastlane, they retained their Tag Team titles when Bayley rolled up Jax for the win. After that, they laid an open challenge to all tag teams and were set to defend their titles at WrestleMania in a Fatal 4-Way Tag Team title match. Bayley was pinned to lose the match, but that wasn’t the end for her.

After her title loss, Bayley was drafted to SmackDown and looked to have a fresh start. After singles losses to Alexa Bliss, Flair and Lynch, she competed in her first women’s Money in the Bank match, where she ended up winning the briefcase. The same night, she cashed in her briefcase on Charlotte Flair to become the SmackDown Women’s champion for the first time in her career.

She defeated Flair again in a Tag Team match. Soon after, she entered a feud with Bliss again. She defeated Lacey Evans and Nikki Cross in singles matches to continue her momentum. At Stomping Grounds, she retained her title over Bliss following a miscommunication from Bliss and Cross. Cross went on to defeat Bayley in a singles match to give Alexa another title shot, which ended up being a 2-on-1 Handicap match. At Extreme Rules, Bayley retained her title against both Bliss and Cross.

After the PPV, she decided to team up with Ember Moon to defeat Rose and Deville, granting Moon a title opportunity after the match. At SummerSlam, they faced off in a competitive match, but Bayley prevailed when she won with a top rope Bayley to Belly. She went on to defeat Cross and Evans in singles matches again. In the Raw main event, she teamed up with Lynch to take on Bliss and Cross in a champions showcase match. She turned on Lynch following Sasha’s interference.

Even though she turned heel, Bayley stayed a delusional character initially. She was challenged and defeated by Flair in a Tag Team match the following week. At Clash of Champions, Bayley used the turnbuckle to cheat and retain her title over Flair. This was not the end of the feud, as Flair pinned Bayley again in SmackDown’s FOX debut episode, granting her another title shot. Bayley lost her title at Hell in a Cell and was visibly upset after the match.

The following SmackDown she received her rematch and shocked the world when she destroyed her Bayley buddies and debuted a new look. In the main event of the show, she defeated Flair to regain her championship, making her a 2x champion. She had her first title defense a few weeks later, retaining against Nikki Cross. She then focused on Survivor Series Triple Threat champions match. In the main event of the PPV, she competed against Becky Lynch and Shayna Baszler, where she tapped out to Baszler.

2019 was no doubt Bayley’s best year on the main roster. She won three different titles, became Miss Money in the Bank, successfully cashed in the briefcase, main evented Raw, SmackDown and Survivor Series and consistently wrestled on all shows. She even got a fresh character and look change, which reinvigorated her main roster career. She did lose in the main event of Survivor Series, but she’s still the champion and looks to hold the title for a very long time, especially with Sasha Banks by her side. 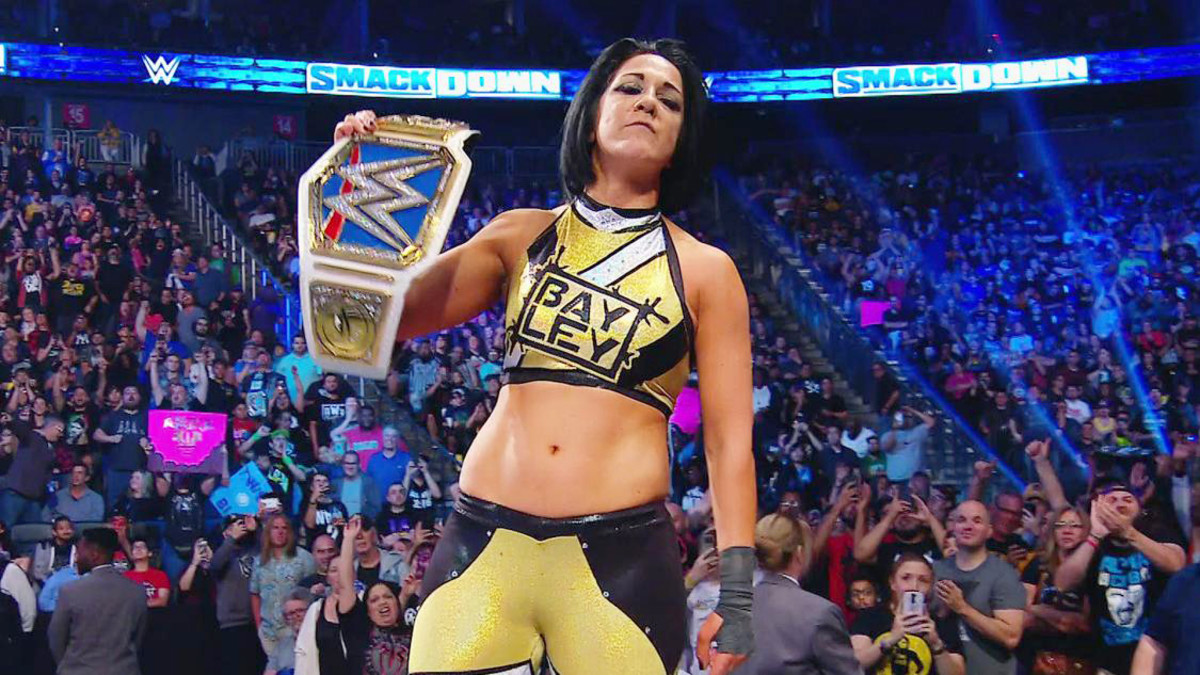 Check with us tomorrow as we reveal the very second woman on our list!